The Maple Forest Resource at The Deakins

The Deakins 100 acre property was originally granted to a German immigrant named Orville Getz by the Crown which deeded the property to the Getzes in 1878 when all grant conditions were fulfilled.

The ownership changed hands in 1906 when the property was purchased by the Charlie Burke family. The Department of Crown Lands at the time would have catalogued it as a maple/beech/hemlock forest. The first records of maple syrup production date to 1910, but this fact was not verified until the year 2000 when owners Don and Mary Helen Deakin razed the original tumble-down sugar shack and discovered newspapers used as insulation dating back to 1910 and 1914.

By 1914 production was in full swing with three generations of Burkes installing 1900 taps and buckets each season and selling maple syrup as far afield as Arnprior.

Production tailed off after 1940 as a succession of new owners acquired the property. In 1972 one of these owners sold off 1,000 prime maple trees to the lucrative veneer market, an action which resulted in a forest that was understocked and not viable for maple syrup production. Left unmanaged for 30 years the competing tree species gained dominance in the forest and regeneration of sugar maples became virtually non-existent. 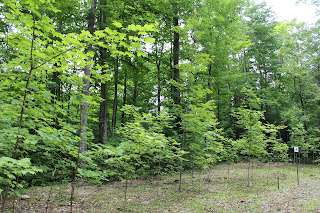 In 1998 new owners, Don and Mary Helen Deakin, in partnership with the Ontario Ministry of Natural Resources filed a plan to rejuvenate the once highly productive forest. Ambitious measures were adopted. A second major logging project in 2008 greatly reduced the number of competing trees in the forest and provided much needed space and access to sunlight for young maples to prosper. A number of in-forest plantations were developed and six-foot tall maple whips were strategically located throughout the forest to ensure an even distribution of trees. To support the plantations project, a sugar maple nursery was established near the house and populated with genetically compatible saplings transplanted from the Deakins’ forest.  Ongoing planting and routine thinning are ensuring the steady growth of the sugar maple resource.  The Ontario Managed Forest Plan (OMFP) is now in its third l cycle (est. 1999). Plan components consist of systematic review, plan development, implementation and evaluation phases.

Today, visiting foresters consider the Deakins a Class A forest due primarily to its biodiversity, low incidence of disease and capacity for regeneration. Resilient and vigorous growers, the maple trees are living up to their reputation. Nevertheless, this forest’s capacity for sap production will still not approach 1910 levels until 2055.
Posted by Unknown at 22:30